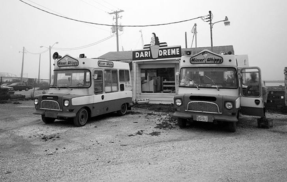 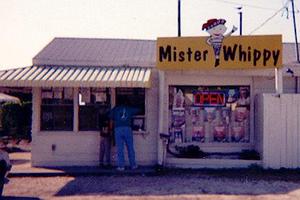 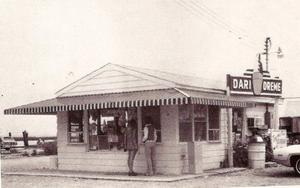 What started as a little custard stand on Chincoteague Island, VA, back in the mid 1950's, when you could buy an ice cream cone for a nickel, is still continuing today.

when Mr. Lee Savage of Chincoteague opened a little

ice cream shop behind his house called the
Dari Dream, which he and his wife worked together.

They would open the last day of school and give away

free ice cream to all the school kids.  Ms. Savage would

sit in her house and wait for someone to go to the shop for ice cream.  She would walk out there every time somebody pulled up.  They must have made a hundred trips a day to that little shop.  After a few years of business, he decided to expand and purchase about a dozen 1971 Morrison Vans from England.

When Mr. Savage returned to the island with the trucks, he began hiring drivers to cover areas from Cape Charles to Ocean City during the summer months.  Although the name of the shop was Dari Dream, the name on the trucks was Mister Whippy.  The trucks would ride through the neighborhoods and as the music played, the kids would run and get their money for a cool, refreshing treat.

As Mr. Savage grew tired of the business in the late 1980's, he retired and left the building alone.  He sold most of the ice cream trucks to men in Delaware and New York.
In 1991, Mr. Savage decided to sell the three remaining trucks and the ice cream equipment to the Conklin family of Chincoteague.  They rented the existing shop, changed the name to Mister Whippy, and stayed there until 1997.  Richard Jr. then built and moved the business to it's new and expanded location on Maddox Blvd, where they are still serving the best soft serve ice cream you'll ever taste, available in cones, homemade waffle cones, many specialties sundaes, and much more.

In 2000, Mr. Conklin retired the old ice cream trucks, and purchased a new Van, shipped it to England, and had a new truck built, which is still in use today.

Be sure to visit Mister Whippy and the Conklin family, where they still offer good portions at a fair price, with the same local, family atmosphere, 20 years in the making.